Don't you just love waking up in the morning to the sound of a weed-whacker? I sure do... I don't even need an alarm clock anymore! Ahhh, the murmuring music of all those green leafy plants being cut into oblivion... Seriously though, I'm sure weed-whackers are very useful in keeping the yard in trim, but do they have to be used at eight in the morning?

Other sounds of Hawaii: lawnmowers humming, chickens squawking in the middle of the night (they're still stuck on the Portuguese time zone), mosquitos buzzing about, sirens warning you of the upcoming tsunami.

Whew, that little blurt of negativity felt good. Now for the positive side to prove that life in Hawaii is worth living. I know that if I ever move away, I will miss certain sounds. Hawaii has a voice; there are melodies and harmonies weaving together in the atmosphere. Although weed-wackers and lawnmowers are part of this orchestra, there are other aspects that blend together making the very air to quiver with music. 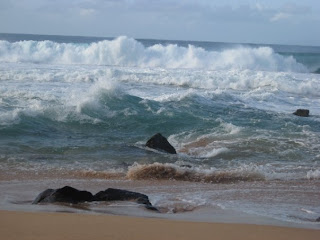 The rustling of the palm trees, the tumult of the sea, the waterfalls brushing gently or roughly against the cliffs. The albatross in the beginning of the year with their mating calls and beak-clacks. The bamboo growing so fast you can almost hear it. The crackle of a bonfire under a sea of stars. The rain gentle in an early morning, collapsing in a golden dusk. I sit on a mountain in the middle of the sea, listening to the most beautiful symphony ever created.
Posted by Rose West at 6:45 PM 2 comments:

The Beginning of Plumeria Season

Seasons in Hawaii are confusing for me. The weather doesn't change enough for me to remember what time of year it is. This can be almost embarrassing, as I form a mental process to decide exactly what month it is: let's see, we've already had Christmas, school isn't out yet, oh and "Alice in Wonderland" just came out. It must be March! When the weather is in the 70s and 80s year-round, it can be hard to remember if it's summer or winter. That's not to say we don't have winter weather here. Hawaiian "winter" means rain and a small drop in temperature. But the trees are still green, and the birds are still flying, and everyone is still wearing shorts.
I am slowly starting to perceive what seasons in Hawaii are. There is mango season and whale season and rainy season. But one season that I love very much is plumeria season. It mirrors the flowering seasons on the mainland. All "winter" the plumeria trees are stark, dead like skeletons. But come March, a few flowers begin to blossom. And then a few leaves show their faces. Before you know it, the whole tree is a-flower and breathing its sweet fragrance into the air. The plumeria trees flower all summer long, which is even better than mainland flowering trees. For those of you on the mainland, if you can find a scented candle or soap that smells like plumeria, you can smell a part of paradise.
The trees like skeletons 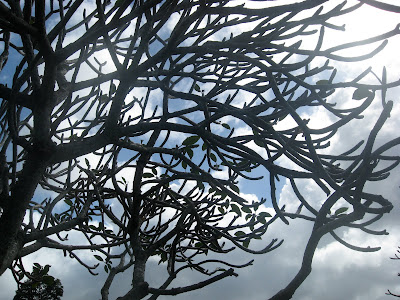 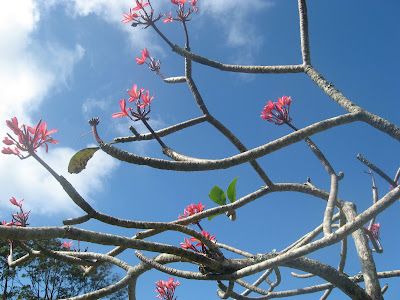 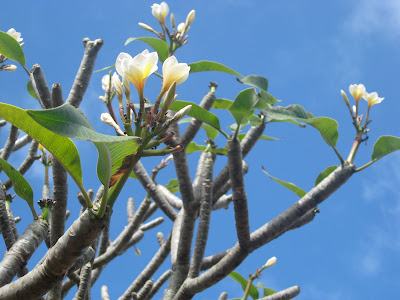 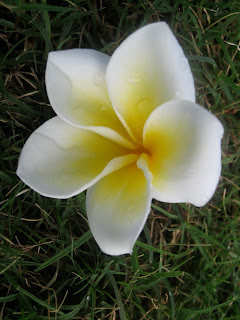 Taking arms against a sea of troubles... is the sea full of trouble? Does it cast about its waves in defiance of peace and prosperity? Island life is always centered on the surrounding ocean. The very definition of "island" is more about water than land.

In my eyes, the ocean that surrounds me looks like a protecting embrace. The sea holds me up, balancing my fragility between the deep of the sky and the deep of the underwater chasm. The sea wrinkles her forehead in what looks like unsatisfied jealousy, but really she is weighed heavy with burdens. Her visage is made stern, not by anger, but by care.

I see the Pacific Ocean every day. It is always in my subconscious. When I drive around the island, the sea is always showing her face at unexpected moments. I could be cruising along a boring stretch of road (Jack Johnson in the background) and suddenly a wedge of ocean hovers up on the horizon just to say hello. The road bends along, turning about every which way, and five minutes later the ocean shows up again. Just like Lewis Carroll's Looking Glass House. Maybe if I turn around backwards, I'll drive straight into the sea and sail off to other shores...
Posted by Rose West at 1:07 PM No comments:

Life in a Tropical Paradise

Life in a tropical paradise isn't always a vacation. When I moved to Hawaii about four years ago, I didn't know what to expect. A new adventure? Perpetual sunshiney bliss? Yes and no. It's taken me a few years to really appreciate life in Hawaii for what it really is. Should I explain more? That would be pointless.

The point here is to blog about what living in Hawaii is really like. It's a blessing to live here. I love being near to the seaside, listening to the palm trees and the ocean waves rushing together, and spending my free days down on the beach. Welcome to the world of pointless paradise!
Posted by Rose West at 12:55 PM No comments: 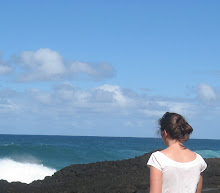 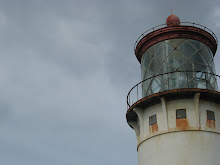 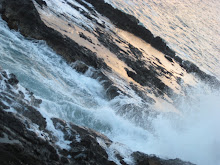 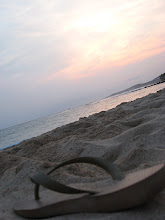 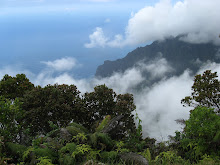 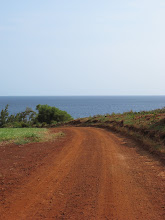